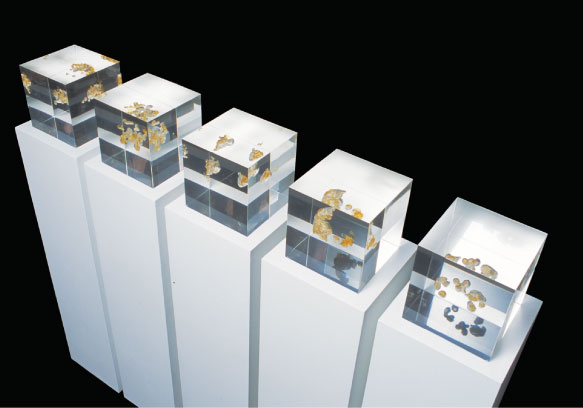 “Cattrell is seeking to grasp the “physicality of consciousness” by exploring the “delicate dialogue between the exterior world and our individual blueprint”. She models this dialogue by casting in resin the morphological patterns of brain activity that correspond to the stimulation of each of the five senses. Neural activity is transformed into glistening apparitions that float in the cranial cavity like a kind of mental plasma. The refractive and reflective crystalline cubes, within which the skull is by implication inscribed, optically slice the golden configurations into shifting interplays of plans and elevations as the spectator moves past them.
… In imaging the brain by casting and modelling, Cattrell stands in a long line going back to Leonardo da Vinci, who cast the ventricles of an ox brain, believing that the fluid in the ventricles was the medium within which the mental faculties operated. ”
(Professor Martin Kemp, Nature 2003, 424: p.18)