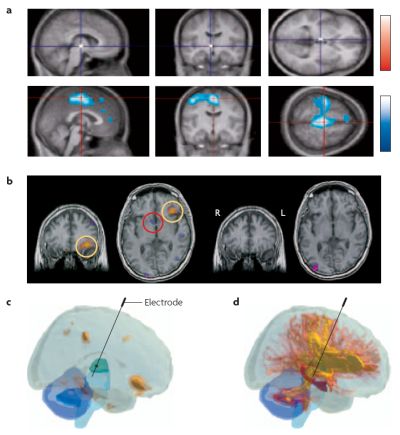 TRANSLATIONAL PRINCIPLES OF DEEP BRAIN STIMULATION
Deep brain stimulation (DBS) has shown remarkable therapeutic benefits for patients with otherwise treatment-resistant movement and affective disorders. This technique is not only clinically useful but can also provide new insights into fundamental brain function through direct manipulation of both local and distributed brain networks in many different species. In particular, DBS can be used in conjunction with non-invasive neuroimaging methods such as magnetoencephalography to map the fundamental mechanisms of normal and abnormal oscillatory synchronization underlying human brain function. The precise mechanisms of action for DBS remain uncertain but here we give an up-to-date overview of the principles of DBS, its neural mechanisms and potential future applications.

Neuroimaging of deep brain stimulation (DBS). a) Significant effects of stimulation of the subthalamic nucleus (STN) on blood flow measured with positron emission tomography (PET). Significant increases (white to red) were found in the left midbrain (top), while significant decreases (light to dark blue) were found in midline frontal to parietal cortices, bilateral somatosensory and motor areas and prefrontal cortex. b) Data from a magnetoencephalography (MEG) experiment of DBS stimulation in the periventricular/periaquaeductal grey area (PVG/PAG) for the treatment of phantom limb pain. When subjective pain relief was obtained with DBS, there were significant activity increases in the left mid-anterior orbitofrontal cortex and right subgenual cingulate cortex (left coronal and axial brain slices). Activity in these brain regions was not found when DBS was turned off, resulting in significant more pain (right coronal and axial brain slices). The significant changes in event-related synchronous and desynchronous power in specific frequency bands are shown on scales from light yellow to red and from purple to dark blue, respectively. c) Three-dimensional rendering of activity measured with MEG on the human brain with a DBS electrode implanted in the PVG/PAG for the treatment of chronic pain. The significant increases in activity are shown in shades of orange, while the other colours represent landmark brain structures: thalamus (green), cerebellum (blue) and brainstem (light blue). d) Three-dimensional rendering of the anatomical connectivity from the four DBS electrode contact sites in the PVG/PAG as assessed with DTI, with the probabilistic tractography presented in different colours from more (yellow) to less significant (dark red). Note the extensive connections with the prefrontal cortex and in particular the orbitofrontal cortex.

Deep brain stimulation projects are carried out in close collaboration with Prof Tipu Aziz and Alex Green from Oxford Neurosurgery.