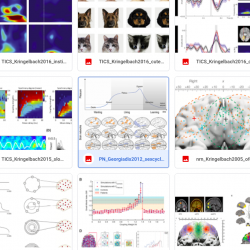 Abstract:A central challenge in neuroscience is how the brain organizes the information necessary to orchestrate behaviour. Arguably, this whole-brain orchestration is carried out by a core subset of integrative brain regions, a ‘global workspace’, but its constitutive regions remain unclear. We quantified the global workspace as the common regions across seven tasks as well as rest, in a common ‘functional rich club’. To identify this functional rich club, we determined the information flow between brain regions by means of a normalized directed transfer entropy framework applied to multimodal neuroimaging data from 1,003 healthy participants and validated in participants with retest data. This revealed a set of regions orchestrating information from perceptual, long-term memory, evaluative and attentional systems. We confirmed the causal significance and robustness of our results by systematically lesioning a generative whole-brain model. Overall, this framework describes a complex choreography of the functional hierarchical organization of the human brain.

Turbulence in the brain 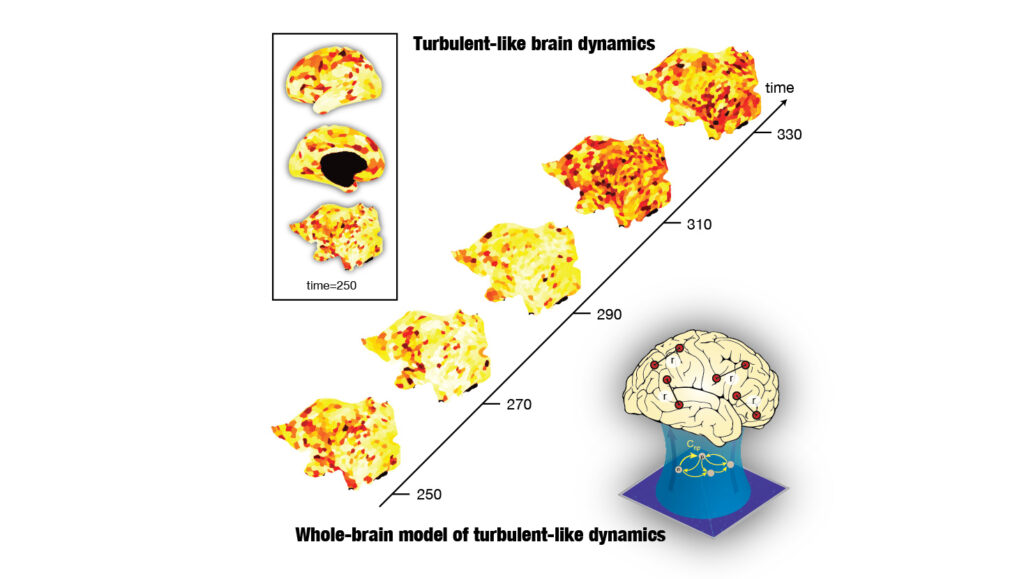 Abstract:Turbulence facilitates fast energy/information transfer across scales in physical systems. These qualities are important for brain function, but it is currently unknown if the dynamic intrinsic backbone of the brain also exhibits turbulence. Using large-scale neuroimaging empirical data from 1,003 healthy participants, we demonstrate turbulent-like human brain dynamics. Furthermore, we build a whole-brain model with coupled oscillators to demonstrate that the best fit to the data corresponds to a region of maximally developed turbulent-like dynamics, which also corresponds to maximal sensitivity to the processing of external stimulations (information capability). The model shows the economy of anatomy by following the exponential distance rule of anatomical connections as a cost-of-wiring principle. This establishes a firm link between turbulent-like brain activity and optimal brain function. Overall, our results reveal a way of analyzing and modeling whole-brain dynamics that suggests a turbulent-like dynamic intrinsic backbone facilitating large-scale network communication. 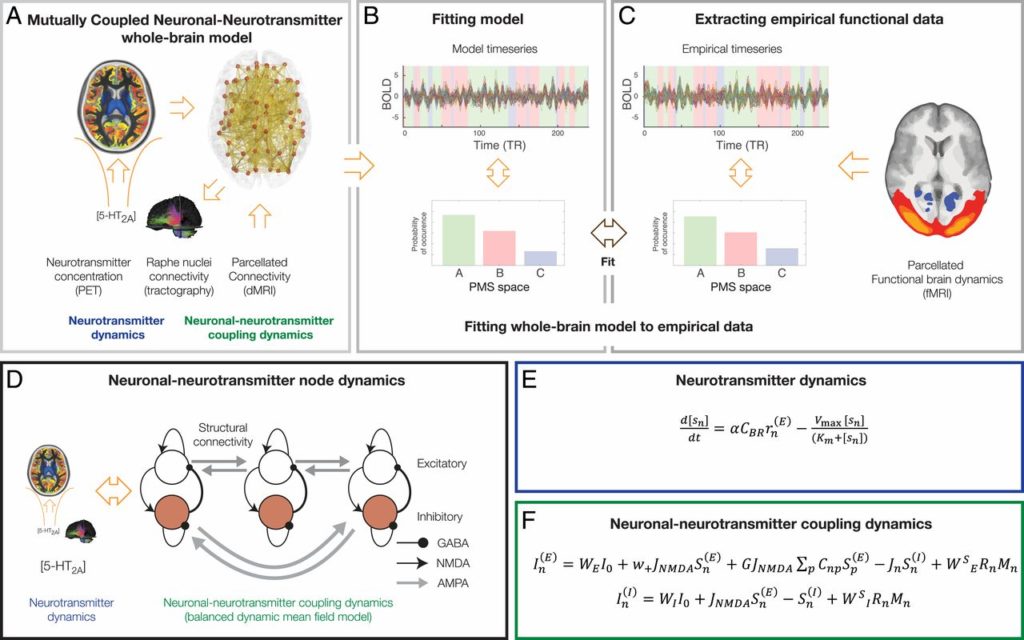 Abstract:Remarkable progress has come from whole-brain models linking anatomy and function. Paradoxically, it is not clear how a neuronal dynamical system running in the fixed human anatomical connectome can give rise to the rich changes in the functional repertoire associated with human brain function, which is impossible to explain through long-term plasticity. Neuromodulation evolved to allow for such flexibility by dynamically updating the effectivity of the fixed anatomical connectivity. Here, we introduce a theoretical framework modeling the dynamical mutual coupling between the neuronal and neurotransmitter systems. We demonstrate that this framework is crucial to advance our understanding of whole-brain dynamics by bidirectional coupling of the two systems through combining multimodal neuroimaging data (diffusion magnetic resonance imaging [dMRI], functional magnetic resonance imaging [fMRI], and positron electron tomography [PET]) to explain the functional effects of specific serotoninergic receptor (5-HT2AR) stimulation with psilocybin in healthy humans. This advance provides an understanding of why psilocybin is showing considerable promise as a therapeutic intervention for neuropsychiatric disorders including depression, anxiety, and addiction. Overall, these insights demonstrate that the whole-brain mutual coupling between the neuronal and the neurotransmission systems is essential for understanding the remarkable flexibility of human brain function despite having to rely on fixed anatomical connectivity.

Abstract: A fundamental problem in systems neuroscience is how to force a transition from one brain state to another by external driven stimulation in, for example, wakefulness, sleep, coma, or neuropsychiatric diseases. This requires a quantitative and robust definition of a brain state, which has so far proven elusive. Here, we provide such a definition, which, together with whole-brain modeling, permits the systematic study in silico of how simulated brain stimulation can force transitions between different brain states in humans. Specifically, we use a unique neuroimaging dataset of human sleep to systematically investigate where to stimulate the brain to force an awakening of the human sleeping brain and vice versa. We show where this is possible using a definition of a brain state as an ensemble of “metastable substates,” each with a probabilistic stability and occurrence frequency fitted by a generative whole-brain model, fine-tuned on the basis of the effective connectivity. Given the biophysical limitations of direct electrical stimulation (DES) of microcircuits, this opens exciting possibilities for discovering stimulation targets and selecting connectivity patterns that can ensure propagation of DES-induced neural excitation, potentially making it possible to create awakenings from complex cases of brain injury. 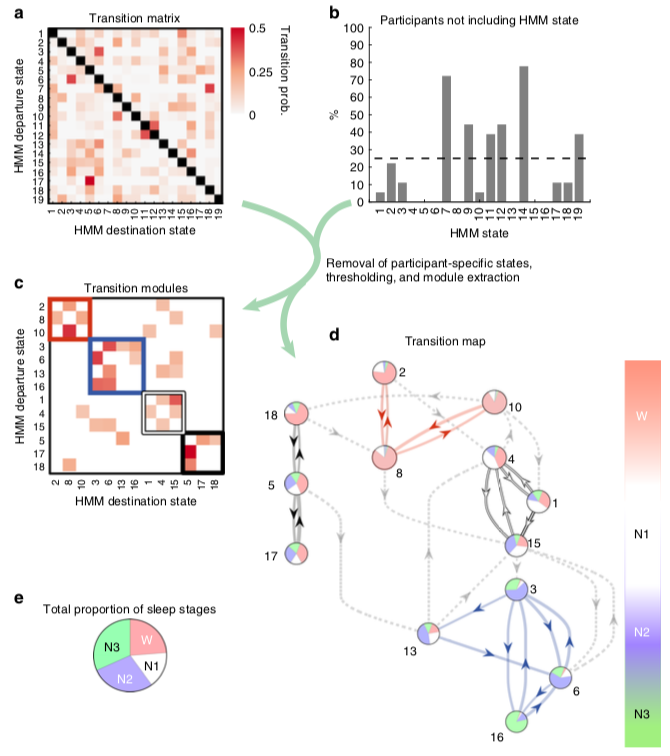 Abstract: The modern understanding of sleep is based on the classification of sleep into stages defined by their electroencephalography (EEG) signatures, but the underlying brain dynamics remain unclear. Here we aimed to move significantly beyond the current state-of-the-art description of sleep, and in particular to characterise the spatiotemporal complexity of whole-brain networks and state transitions during sleep. In order to obtain the most unbiased estimate of how whole-brain network states evolve through the human sleep cycle, we used a Markovian data-driven analysis of continuous neuroimaging data from 57 healthy participants falling asleep during simultaneous functional magnetic resonance imaging (fMRI) and EEG. This Hidden Markov Model (HMM) facilitated discovery of the dynamic choreography between different whole-brain networks across the wake-non-REM sleep cycle. Notably, our results reveal key trajectories to switch within and between EEG-based sleep stages, while highlighting the heterogeneities of stage N1 sleep and wakefulness before and after sleep.

Abstract: A key unresolved problem in neuroscience is to determine the relevant timescale for understanding spatiotemporal dynamics across the whole brain. While resting state fMRI reveals networks at an ultraslow timescale (below 0.1 Hz), other neuroimaging modalities such as MEG and EEG suggest that much faster timescales may be equally or more relevant for discovering spatiotemporal structure. Here, we introduce a novel way to generate whole-brain neural dynamical activity at the millisecond scale from fMRI signals. This method allows us to study the different timescales through binning the output of the model. These timescales can then be investigated using a method (poetically named brain songs) to extract the spacetime motifs at a given timescale. Using independent measures of entropy and hierarchy to characterize the richness of the dynamical repertoire, we show that both methods find a similar optimum at a timescale of around 200 ms in resting state and in task data. 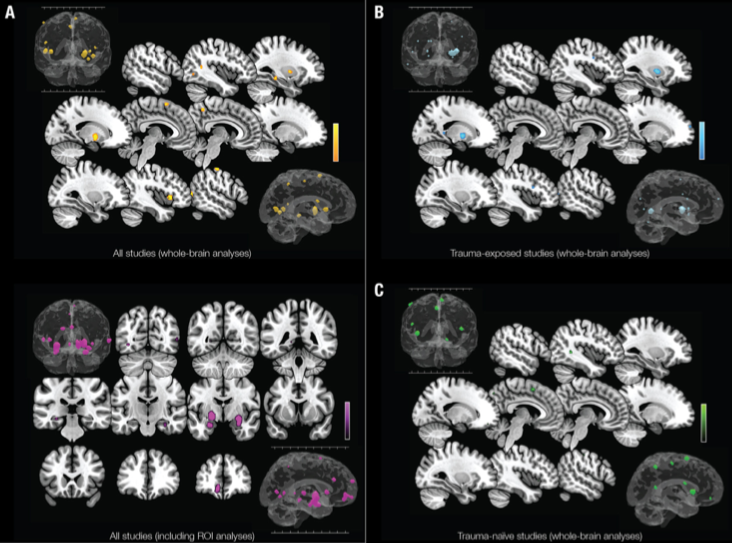 Abstract: Stress affects brain function, and may lead to post-traumatic stress disorder (PTSD). Considerable empirical data for the neurobiology of PTSD has been derived from neuroimaging studies, although findings have proven inconsistent. We used an activation likelihood estimation analysis to explore differences in brain activity between adults with and without PTSD in response to affective stimuli. We separated studies by type of control group: trauma-exposed and trauma-naive. This revealed distinct patterns of differences in functional activity. Compared to trauma-exposed controls, regions of the basal ganglia were differentially active in PTSD; whereas the comparison with trauma-naive controls revealed differential involvement in the right anterior insula, precuneus, cingulate and orbitofrontal cortices known to be involved in emotional regulation. Changes in activity in the amygdala and parahippocampal cortex distinguished PTSD from both control groups. Results suggest that trauma has a measurable, enduring effect upon the functional dynamics of the brain, even in individuals who experience trauma but do not develop PTSD. These findings contribute to the understanding of whole-brain network activity following trauma, and its transition to clinical PTSD.

Abstract: Moving to music is an essential human pleasure particularly related to musical groove. Structurally, music associated with groove is often characterised by rhythmic complexity in the form of syncopation, frequently observed in musical styles such as funk, hip-hop and electronic dance music. Structural complexity has been related to positive affect in music more broadly, but the function of syncopation in eliciting pleasure and body-movement in groove is unknown. Here we report results from a web-based survey which investigated the relationship between syncopation and ratings of wanting to move and experienced pleasure. Participants heard funk drum-breaks with varying degrees of syncopation and audio entropy, and rated the extent to which the drum-breaks made them want to move and how much pleasure they experienced. While entropy was found to be a poor predictor of wanting to move and pleasure, the results showed that medium degrees of syncopation elicited the most desire to move and the most pleasure, particularly for participants who enjoy dancing to music. Hence, there is an inverted U-shaped relationship between syncopation, body-movement and pleasure, and syncopation seems to be an important structural factor in embodied and affective responses to groove.

A specific and rapid signature for parental instinct 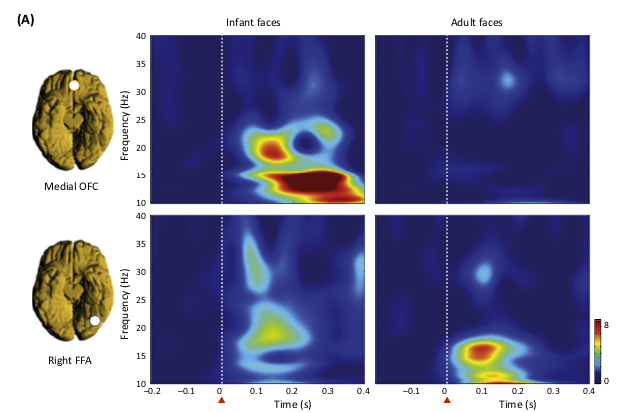 Abstract: Darwin originally pointed out that there is something about infants which prompts adults to respond to and care for them, in order to increase individual fitness, i.e. reproductive success, via increased survivorship of one’s own offspring. Lorenz proposed that it is the specific structure of the infant face that serves to elicit these parental responses, but the biological basis for this remains elusive. Here, we investigated whether adults show specific brain responses to unfamiliar infant faces compared to adult faces, where the infant and adult faces had been carefully matched across the two groups for emotional valence and arousal, as well as size and luminosity. The faces also matched closely in terms of attractiveness. Using magnetoencephalography (MEG) in adults, we found that highly specific brain activity occurred within a seventh of a second in response to unfamiliar infant faces but not to adult faces. This activity occurred in the medial orbitofrontal cortex (mOFC), an area implicated in reward behaviour, suggesting for the first time a neural basis for this vital evolutionary process. We found a peak in activity first in mOFC and then in the right fusiform face area (FFA). In mOFC the first significant peak (p,0.001) in differences in power between infant and adult faces was found at around 130 ms in the 10–15 Hz band. These early differences were not found in the FFA. In contrast, differences in power were found later, at around 165 ms, in a different band (20–25 Hz) in the right FFA, suggesting a feedback effect from mOFC. These findings provide evidence in humans of a potential brain basis for the “innate releasing mechanisms” described by Lorenz for affection and nurturing of young infants. This has potentially important clinical applications in relation to postnatal depression, and could provide opportunities for early identification of families at risk.